Breastfeeding is the cheapest and most effective life-saver in history

Beijing, 5 August 2013 – During World Breastfeeding Week (1–7 August), the United Nations Children's Fund (UNICEF) is calling for support to breastfeeding as the most effective and inexpensive way of saving a child's life.

“There is no other single health intervention that has such a high impact for babies and mothers as breastfeeding and which costs so little for governments,” said UNICEF Deputy Executive Director Geeta Rao Gupta. “Breastfeeding is a baby's ‘first immunization' and the most effective and inexpensive life-saver ever.”

Children who are exclusively breastfed are 14 times more likely to survive the first six months of life than non-breastfed children. Starting breastfeeding in the first day after birth can reduce the risk of new-born death by up to 45 per cent.

Despite broad consensus on the health benefits of breastfeeding among health authorities in China, the exclusive breastfeeding rate for children under 6 months old in China is only 28 per cent. The figure has remained low due in part to the general lack of public facilities to accommodate breastfeeding mothers.

Jointly launched by UNICEF and the National Centre for Women and Children's Health in celebration of Children's Day on 1 June 2013, the “10m2 of Love” (10 Square Metres of Love) breastfeeding advocacy campaign has brought together government organizations, media, corporations and civil society  to promote the establishment of 10-square-metre-sized breastfeeding rooms in the workplace and public areas. The 10m2 of Love campaign works to create an enabling breastfeeding environment and support working mothers to continue breastfeeding after maternity leave and return to work.

“Exclusive breastfeeding is the simplest thing. There's no need for any bottles, milk heater, sterilizer or formula cans. You only need to put your baby next to you, sleep when she's sleeping and feed her when she's hungry. When you go out, you can just carry the baby, no need for a babysitter,” said Ma Yili, UNICEF Special Advocate for Breastfeeding and Early Child Development, on her Weibo microblog account. “Exclusive breastfeeding saves you money and protects the environment. Why would you not breastfeed?”  Ma Yili has prominently displayed the “10m2 of Love” logo on her Weibo homepage, making it visible to all of her 26 million followers.

Last week, a national advocacy event to celebrate the World Breastfeeding Week was jointly held by the National Health and Family Planning Commission, the World Health Organization, UNICEF and the Beijing Health Bureau.

“So much of the media coverage in China on infant feeding focuses on the negative – the real and serious issues of the quality of infant formula, the supply problems and the high cost.  This completely misses the positive point that the safest, highest quality infant food is freely available to nearly every mother and infant – in unlimited quantities.” said Tim Sutton, Officer-in-Charge and Deputy Representative of UNICEF China. “Breast milk is designed by nature to be the perfect food for our most precious citizens – our infants.   It's totally safe, it's free and the supply is unlimited. As media coverage over the last few days about contaminated milk supplies from New Zealand has shown, there is nothing safer, nothing better for your baby than breast milk. This is what the 10m2 of Love campaign is all about and this is the message we must get across during this World Breastfeeding Week.” 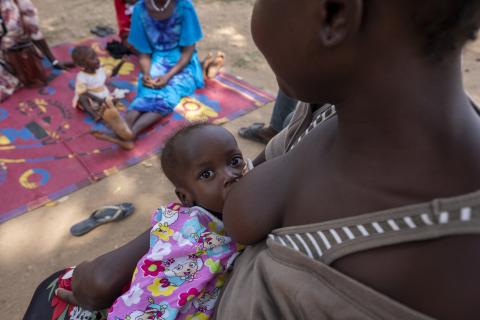 More than half of parents and pregnant women exposed to aggressive formula milk marketing – WHO, UNICEF