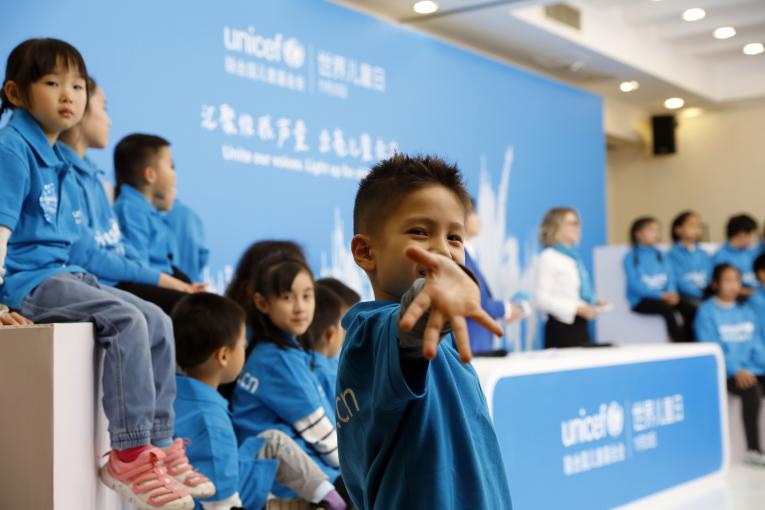 UNICEF/China/2021/Ma Yuyuan
Children participate in a livestream of World Children’s Day celebration hosted by UNICEF China in a studio in Beijing on 20 November 2021.

Beijing, 20 November 2021 – Children, young people, partners from all sectors, celebrities and the public in China came together to mark World Children’s Day, 20 November. World Children’s Day is a global day of action for children, by children. This year, as the COVID-19 pandemic and the climate crisis continue to inequitably affect children worldwide, UNICEF is working to ensure that the voices of children and young people are heard, and that they can participate in solving the issues that matter most to them. In doing so UNICEF is calling for all of society to unite for girls’ and boys’ rights to health, education, protection and participation.

The impact of COVID-19 altered but did not prevent World Children’s Day celebrations, with UNICEF China engaging people across China through a livestream event. This child-led event saw the announcement of two new UNICEF Youth Advocates and the release a World Children’s Day theme song by UNICEF Ambassador Wang Yuan, titled ‘In the Future’. A total of 23 cities lit up in blue iconic buildings and monuments, including a section of the Great Wall of China, to symbolize their commitment to upholding children's rights, with many of them connecting in real time during the livestream. Hosted in a UNICEF studio in Beijing, children took over the event.

UNICEF Representative to China Ms Cynthia McCaffrey said, “We unite on this World Children’s Day to recognize progress made for children and to commit to doing even more to realize the rights of every child. Let’s listen to children, hear their ideas and build on their creativity. Children and youth themselves are powerful advocates for the issues that are most important to them.”

During the livestream, Ms McCaffrey announced the appointment of two new UNICEF Youth Advocates, Zhao Chen (20) and Yu Xinwei (19). Zhao Chen, who has a visual impairment, has been advocating for digital accessibility and inclusion for children and young people who have disabilities. “I have always wanted to work with more people to inspire creativity and raise awareness on digital inclusion in a different way,” Zhao Chen said, adding, “I would like to call for all young people to speak up and join me in creating a more inclusive digital space.”

UNICEF Ambassador Wang Yuan joined the livestream and launched the World Children’s Day theme song written by him, ‘In the Future’. Inspired by the ambassador’s hopes for the future of children and young people, the song emphasizes children’s potential and a hope that they will be empowered to shape their own futures. Wang Yuan also invited children and young people to participate in a challenge by submitting their own recordings of the song. A selection of these videos will feature in a choir version of the World Children’s Day theme song, which will be released around the New Year.

Wang Yuan said, “Children are creative and curious. They should be valued, protected and respected. They should be provided with knowledge, love and care, and a safe and friendly environment to grow up in. Their voices should be heard and acted upon. Together, we will build a better society, a better world.”

In collaboration with the Chinese People's Association for Friendship with Foreign Countries and the China Friendship Foundation for Peace and Development, the cities and landmarks that lit up in blue as a commitment to children’s rights included Chongqing, Guangzhou, Guiyang, Shenyang, Taiyuan, Wuhan, Zhengzhou. Other cities or counties that lit up include Baoding, Changsha, Chengdu, Chongzhou, Dazhou, Dongming, Gu’an, Haikou, Heze, Huzhu, Maduo, Nanjing, Shenzhen, Suzhou, Weihai and Zhoushan. Many cities also held online and offline light up events, with a drone demonstration dedicated to World Children’s Day at Beijing WTown. A virtual light up was held online through a UNICEF-hosted H5 page.

UNICEF and Xinhua News Agency co-launched an interactive feature through their respective digital platforms to amplify children’s voices and their aspirations for a better future. Around World Children’s Day, the CCTV Children of Sports and Children’s Programme Centre of China Media Group broadcast a special programme for World Children’s Day with children empowered to participate in media. Their studio was also taken over by a child moderator on the day.

UNICEF Ambassadors Chen Kun, Ma Yili and Jeremy Lin joined UNICEF’s World Children’s Day digital campaign to amplify the message “Unite our Voices, Light up for Children” through UNICEF’s channels and their own accounts on Weibo.

With the support of the Chinese Athletics Association many Chinese athletes, including Su Bingtian and Gong Lijiao, shared their own photos framed for World Children’s Day on Weibo to speak up for children's rights. Other celebrities who joined the online campaign include Olympic champions Zhang Yufei (swimming) and Zhang Jiaqi (diving); dance blogger Liao Zhi; and singers Shang Wenjie and A Duo.

Children and young people, their families and friends are encouraged to join the World Children’s Day theme song challenge on Weibo, which is jointly supported by Weibo Gongyi, Sina Entertainment, Sina News, Weibo Tianxia, Weibo Sticker, Weibo Music and Sina Music. They can also share their own photos framed for World Children’s Day and use a magic emoji to go blue on Kuaishou. On Bilibili, UNICEF will release a sign language version of the theme song for people with hearing impairments.

World Children’s Day commemorates the adoption on 20 November 1989 of the Convention on the Rights of the Child, which China ratified in 1992. UNICEF and partners are calling for a united world where no child is left behind, where their rights are protected, and where their voice makes a path for their future. 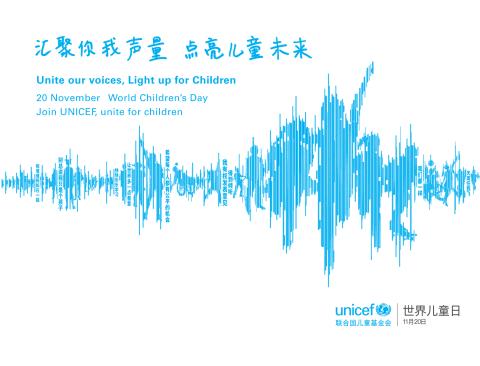 Unite Our Voices. Light Up for Children. 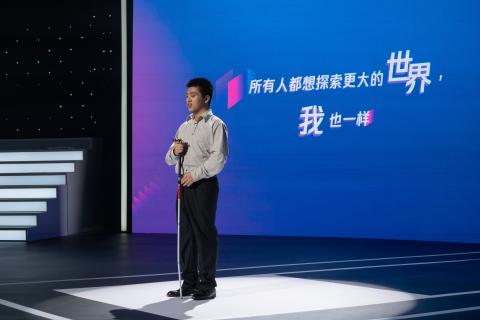 The change needed for a digital world still full of barriers

better digital inclusion for everyone, everywhere and in every circumstance 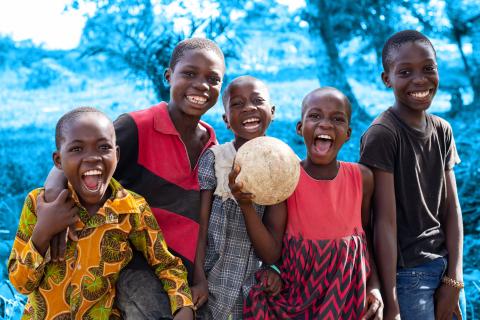