Population Status of Ethnic Minority Children in China in 2015

China is a multi-ethnic country comprising 56 ethnic groups, including Han and 55 ethnic minority groups. In 2015, the number of ethnic minority children aged 0–17 in China was 31.11 million, accounting for 11.5 per cent of the total child population. This fact sheet describes and analyzes the status of China’s ethnic minority children, based on data from the 2015 1% National Population Sample Survey conducted by the National Bureau of Statistics of China. 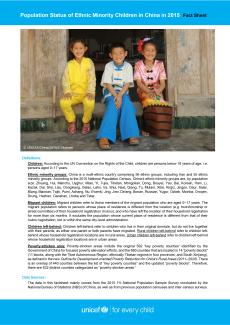 An Atlas of Social Indicators of Children in China

An overview of the situation of children in China.