Breaking out of a Cocoon

I always have a lot of thoughts in my mind, but no one listens to my thoughts. My father is sick and my mother is busy running errands for the family, and she doesn’t have the time and energy to take care of me. I feel lonely, depressed and inferior. I don’t know what I can do to help my mom or help my father get better. In the end, I found that there is nothing I can do, doing homework is not helpful either.

If I don’t do homework, the teacher will punish me, and I will just skip school. When I skip school, my mom will pay extra attention to me. Only then would I feel she cares about me.

Dongdong (an alias), now 13, was struggling with school a few years ago, when his father’s illness upended his family’s life. Living in a small town in Mile, Yunnan Province, the family relied on Dongdong’s mother’s meager income. She had to take care of her husband while making a living, so she had little time to care for the children. That was when Dongdong started skipping school and picking fights with others.

Dongdong’s mother was called in to the school because of the boy’s performance time after time. She would sit on a staircase in the school and cry. She was about to give up on him when things took a turn for the better.

Dongdong started doing house chores and helping take care of his father. His teachers no longer complained about him, and he even won awards for his academic performance.

It all started with the introduction of Social and Emotional Learning (SEL) classes at Dongdong’s school, which soon became the students’ favourite subject.

Rather than focusing on traditionally prioritized skills such as literacy and numeracy, SEL helps to build skills in self-recognition, managing emotions and maintaining positive relationships - essential for a child's holistic development.

Since 2011, UNICEF and the Ministry of Education have brought SEL to classes in 625 schools in 11 provincial-level regions. More than 300,000 children like Dongdong have had the opportunity to develop non-cognitive skills through fun and participatory activities.

“Every Friday I attend the SEL class with great anticipation. It is nothing like other courses. In the SEL class, students and the teacher speak their mind freely just like friends, spilling things from the bottom of hearts that would never be shared in other classes,” Dongdong wrote in his diary.

In one of the SEL classes, the teacher led the class to discuss the topic of "Cherish What You Have". Dongdong secretly shed tears and realized how much his family, friends, and classmates meant to him. After class, he approached his classmates and started talking to them, and started to feel closer to them.

“In SEL classes, our teacher and classmates share their emotions, listen to each other with patience, and give advice. It is heartwarming. I love my classmates,” Dongdong wrote. “Our teacher shares stories about my peers during the class. Sometimes I felt like she was telling my stories, but then I realized my peers also share my worries and confusion. That makes me feel a lot less lonely and at a loss.”

SEL’s impact didn’t just stop at students though; it has also changed teachers. Li Wenhui, who teaches SEL at Dongdong’s school, used to only concentrate on her students’ academic performance. She was sceptical about SEL’s benefits when it was introduced, but over time she started seeing things differently.

“If a person studies mechanically, they will be spiritually incomplete. He loses out no matter how outstanding he is academically,” says Ms. Li.

Instead of criticizing her students for their faults, Ms. Li now prefers discovering their strengths, and inspiring them.

“Ms. Li likes asking me to answer questions. She said a big virtue of mine is being thoughtful and articulate. Every time I am called to give an answer, I feel full of energy,” wrote Dongdong. “She is more gentle, patient and approachable. Once I accidentally broke the class display. She didn’t yell at me, but instead listened to my explanation, and we fixed it together. I prefer teachers just like her. I like Ms. Li’s classes. I feel very happy going to school and I find studying easy.”

After the introduction of SEL, Dongdong became a boy with bright dreams and unbreakable optimism.

Today I am very happy. Ms. Li complimented me for being smart and said I am making great progress, and that I could be admitted into a top middle school if I keep working hard. I must study hard, prove myself, and repay my parents and teachers with excellent grades. I’m sure that my parents will give me their big smiles. I feel like I’m empowered, just like Ultraman!

*Dongdong and his guardian consented to the publication of these diary entries. At least 1 in 7 children and young people has lived under stay-at-home policies for most of the last year, putting mental health and well-being at risk

Learning from home can be a challenge, but it can be made fun! 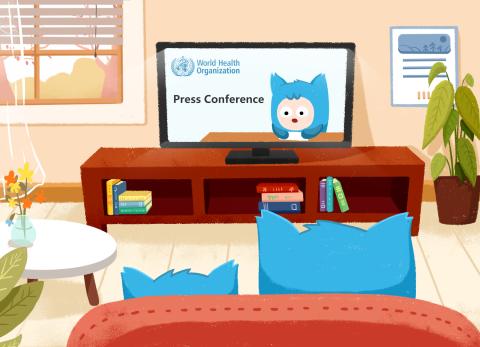 What lessons can we take away from the COVID-19 outbreak?

Be kind to yourself! Let’s work to get through this together! Here are some tips on how to teach your child to understand and appreciate a pluralistic society.