Welcome to our online resource page for the International Symposium on Child Poverty and Development! This historic meeting in Beijing brought together some of the leading experts on child poverty from across the globe and China.

On this page you will find our in-depth article summarizing the main findings of the meeting. To the right you can find and download any of the fascinating presentations given at the Symposium. And at the bottom of the main article you will find helpful links on child poverty.

China's capital city was recently the setting for an important step forward in the international discourse on child poverty.

Leading academics, policy makers and government officials from some twenty developing countries joined more than one hundred Chinese poverty alleviation officials and experts at the International Symposium on Child Poverty and Development in Beijing, 20-22 November 2012.

Co-hosted by the State Council Leading Group Office on Poverty (The National Rural Revitalization Administration now) Alleviation and Development (LGOP) and the United Nations Children's Fund (UNICEF), the symposium was described by Mr. Ou Qingping, a Senior Official of LGOP, as the "the most important conference on child poverty held in China."

The symposium was made possible with a generous grant from the Australian Agency for International Development.

Poverty is more than a line

Traditional efforts to reduce poverty have mainly focused on raising income and increasing employment. This has tended to obscure the "non-income" dimensions of poverty that have a deep and potentially life-long impact on children in households below and above the "poverty line."

Increasingly, experts agree on the need to understand poverty, especially as it affects children, as a multi-dimensional problem.

The International Symposium on Child Poverty and Development focused on the impact of poverty's "deprivations" – such as poor nutrition, inadequate sanitation and exposure to abuse and neglect – that often lead to unique and irreversible deficits in child development. Traditionally, these issues have not been systematically factored into mainstream poverty alleviation strategies.

In late 2007, UNICEF launched a seminal Global Study on Child Poverty and Disparities in 52 countries in an effort to produce comparable data on the impact of limited access to adequate nutrition, safe drinking water, safe sanitation, health, shelter, education and information on child poverty.

In recent years, the Global Study has generated evidence, insights and networks that have influenced national development plans and fed into poverty reduction strategies.

According to Gillian Mellsop, UNICEF China's Representative, there is growing consensus that poverty alleviation efforts must address the full range of serious deprivations faced by the most vulnerable children.

"Specific programmes are needed to assist children without primary care-givers, children with disabilities, migrant children, children affected by AIDS, and children who are neglected, abused or exploited."

UNICEF/China/2012/Jerry Liu
Traditional efforts to fight poverty have focused on income, while many “non-income” aspects of poverty leave life-long scars on children.

In 2011 the Government of China adopted a new rural poverty reduction strategy which included children as a special target group for the first time. China accounts for one out of every five children living in the developing world.

Despite its progress in bringing hundreds of millions out of poverty in recent decades, by the World Bank's US$2 per day household consumption measure, almost one hundred million children in China experience poverty.

Research suggests that nutrition, safe water, sanitation and housing constitute the most severe poverty deprivations for children in China.

The new focus on children in rural poverty suggests a growing consensus in the world's most populous country that child poverty differs from adult poverty, and that it has different causes and effects.

China's experience in poverty reduction is seen as increasingly relevant for other developing countries. At the same time, China has much to learn from countries that have more experience in measuring and addressing the multi-dimensional nature of child poverty.

Income inequality has increased significantly in China in recent years, yet in a number of countries, notably in Latin America, inequality is narrowing.

With the support of the Australian Government, UNICEF China and LGOP brought together a dynamic group of leading poverty alleviation thinkers, government policy makers and researchers for the Beijing symposium.

"It is hard today to even imagine a world in which no child lives in poverty.  But the scale of the task should not deter us from seeking solutions," observed Australian Ambassador to China, Ms. Frances Adamson.

Participants came from some 20 countries in Asia, Africa, the Middle East and the Americas to share new findings, learn about innovations and improve efforts to help the world's poor children.

Ambassador Adamson: "It is important we continue to share ideas, build understanding and work in partnership to tackle this problem together."

From one generation to another

According to social policy expert, Peter Whiteford of Australia National University, child poverty itself is the main reason why poverty is so often transmitted from one generation to the next. Breaking this inter-generational cycle of poverty was the basic theme of the symposium.

The concept of "conditional cash transfer" – social assistance provided for beneficial actions such as school attendance and proper child feeding – is gaining momentum as an effective poverty alleviation strategy across different regions.

South African experts presented results from that country's unconditional cash support programme for children. The "Child Support Grant," originally for children under seven, now reaches all children under eighteen. Recent studies show the scheme is providing a secure first step toward breaking out of the cycle of poverty.

One panel in the symposium focused on the mounting evidence on the critical importance of early childhood development services in addressing child poverty.

Symposium dialogue frequently underscored the need to initiate early childhood development strategies as early as possible, preferably at conception, as well as the benefits of integrating health, stimulation, protection and nutrition into ECD strategies.

The challenge of addressing poverty among severely marginalized populations was another important theme.

In Viet Nam special culturally sensitive efforts to bring down much higher rates of poverty related deprivation among ethnic minorities have been developed.

In Mongolia essential mother and baby health services have been tailored to meet the special demands of extremely remote herding communities, seldom reached in the past by government social services.  The resulting improvements have been extremely impressive.

The special challenges faced by children in poor urban settlements were highlighted in presentations from China, Egypt, Nigeria and the Philippines. Migration is often a common factor which has led to significant growth in urbanization trends throughout the developing world. In 2012 China's urban population surpassed the 50 per cent mark.

In Egypt the "Informal Settlement Development Facility" has been established to address the special needs of urban poor in slums and unplanned areas.  The Philippine Government has launched innovative housing programs to help its poor urban population.

Although China officially defines poverty as exclusively a rural phenomenon, there is growing Government recognition that urban children, especially children of migrant workers, are also at risk. Mme. Song Wenzhen of the National Working Committee on Children and Women described her Government's plans to expand access to essential services for children affected by migration.

Yu Jiantuo, a senior researcher with CDRF, observed that China has traditionally sought to reduce poverty by creating jobs, and that it is time to switch to a social policy model, similar to what has been shown successful in Mexico and Brazil.

The final session of the symposium focused in on the growing trend of developing country poverty alleviation innovations being studied and transported into other developing country contexts. The Brazilian Bolsa Familia conditional cash transfer approach has been replicated in 18 Latin American and Caribbean countries and has led to dramatic poverty reduction trends in a combined population of 135 million.

Participants also learned of the strong links being forged with the support of UNICEF between Mexico and Morocco. Mexico's advanced work on measuring income and non-income deprivations in multi-dimensional poverty, will be adapted for implementation in Morocco.

"The amount of innovative work being done right now across the globe to end the vicious cycle of child poverty is quite staggering. I don't believe any of us realized what a rich pool of experience there is for other countries to draw on," said Bill Bikales, Chief of Social Policy for UNICEF China. "Discussions have already begun about repeating this conference to help the participants keep up-to-date on what we are all doing."

The UNICEF Global Study on Child Poverty and Disparities:
http://www.unicef.org/socialpolicy/index_45357.html 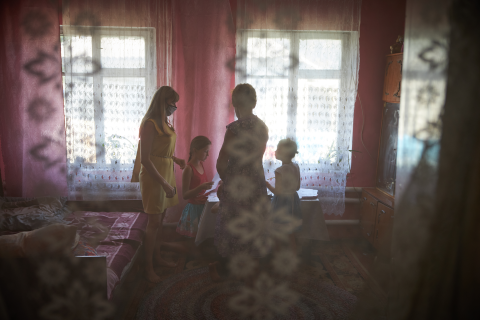 150 million additional children plunged into poverty due to COVID-19, UNICEF, Save the Children say

COVID-19: Number of children living in household poverty to soar by up to 86 million by end of year