The Orphans of Liangshan

In the old framed photos, Rizha's parents embrace their three smiling children in front of a photo studio backdrop, just like any other family. Five years after the photo session, Rizha and her two younger brothers are all alone. They support themselves in a dilapidated mud-brick house, in Jiudu Township, Butuo County, Liangshan Yi Ethnic Autonomous Prefecture of China.

13-year-old Rizha has mixed feelings toward her parents. “I miss them sometimes; get angry and hate them at other times. But anyway, they gave life to us, and they were not the only people in our village who were addicted to drugs, so the hatred is eventually quenched in my heart.” She said.

Last year, her father's sister who had been taking care of the three children got married and moved to another village. Rizha gave up further study after graduation from primary school and stayed home to take care of her brothers, cook food, clean the house, grow crops, feed pigs, and chop firewood – like the “mother” of the family.

The children only have two meals per day, "We eat potatoes most of the time, and occasionally some rice or wheat flour – we have already run out of it. My aunt will send some food to us. Even so, the food is not enough."

"The roof leaks on rainy days. Sometimes, cats walk on the roof and we are too scared to fall asleep. The quilt is not warm in the winter and we don't have enough clothes. If it is too freezing cold, I will send my brothers to my aunt's home to sleep and I stay alone to guard our home." She said.

Her oldest brother is now a second grade boarding school pupil and goes back home during long vacations. The youngest brother is age six but looks like a three year old. He usually follows Rizha to the field, or walks silently from one end of the village to the other, his head bowed and his eyes avoiding contact with strangers.

Rizha feels that without parental love and care since the age of one hasn't affected him, because "He is still too young to know about what heart-break is".

With the support of the Child Welfare Model Project, launched jointly by UNICEF and the Ministry of Civil Affairs in May 2010, these three children have gotten their birth registration or Hukou, with which they become eligible to receive basic social security. Now they receive a 165 Yuan (USD 25) monthly living subsidy for lower-income families, attended the rural medical scheme, and soon they will receive the monthly living allowance for orphans living outside of welfare institutions provided by the Ministry of Civil Affairs.

More importantly, for Rizha, she now has a grownup – the village Child Welfare Director – to help her solve problems whenever in need.

"I feel much better if people come to help." She smiled. Of all the families we've visited during the field trip, she is the only child who didn't cry but told her story with a calming smile.

"I hope when my brothers grow up I can find them wives and build new houses for them. I hope they will not become addicted to heroines or be naughty. If they all settle down, then I can get married." She said.

She said she needs warm clothes for winter most. "Don't you want toys? You can tell them that." She lowers down to ask her little brother.

Since its launch, the child welfare service system has been set up in 120 project villages in five provinces of western China, mainly in the poorest, hard-to-reach areas, often with large ethnic minority populations, such as Liangshan.

For the first time, an extensive survey on the state of children affected by poverty has been conducted in all of the project villages, so that children with special needs such as children affected by HIV and AIDS, children in poverty, orphans, children with disabilities and others can be more visible in disaggregated data and be closely monitored by child welfare directors in every village whose job it is to provide assistance and get more support from government agencies and service providers.

By the end of last year, some 1,000 children have had their birth registered, 800 have joined the rural medical scheme, 1,200 dropouts have resumed schooling, and 450 elder children have received animal husbandry training. For the first time many children in this remote mountainous community have taken part in supervised recreational games and group activities.

Yet, there is still a long way to go. According to the survey, thousands of children have lost one or both parents to AIDS, or live without parental care because their parents are serving jail terms.  According to the Yi ethnic custom, when the husband dies, and the wife remarries, she is not allowed to take the children with her, which means the children are left without parental care. If there are no grandparents to take care of them, they have to face the world alone.

"If I study hard, people will come to help us." Bashu, an orphan girl aged 11, said with determination in her eyes. "When I grow up, I just want to be the same as you."

Note: To protect privacy, all of the HIV-positive people and children's name have been changed.

Chen Ling, a contracts specialist in Kabul, shares her professional journey from Beijing to Kabul, via Timor-Leste, Pakistan, and other global destinations. 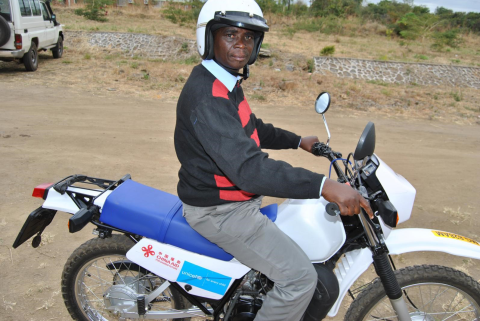