Despite dramatic progress on Child survival, 1 million children die during their first day of life from mostly preventable causes

NEW YORK, 16 September 2014 – Child survival rates have increased dramatically since 1990, during which time the absolute number of under-five deaths has been slashed in half from 12.7 million to 6.3 million, according to a report released today by UNICEF.

The 2014 Committing to Child Survival: A Promise Renewed progress report, indicates that the first 28 days of a newborn's life are the most vulnerable with almost 2.8 million babies dying each year during this period. One million of them don't even live to see their second day of life.

Many of these deaths could be easily prevented with simple, cost-effective interventions before, during and immediately after birth.

Analysis points to failures in the health system during the critical time around delivery as a significant contributing factor to these unnecessary deaths. It also shows that there is considerable variation – from country to country and between rich and poor – in the take-up and quality of health services available to pregnant women and their babies.

Key findings in this study include:

Additionally, the report shows that the education level and age of the mother has a significant bearing on the chances of her baby's survival. Neonatal mortality rates among mothers with no education are nearly twice as high for those with secondary schooling and above.

“The data clearly demonstrate that an infant's chances of survival increase dramatically when their mother has sustained access to quality health care during pregnancy and delivery,” said Geeta Rao Gupta, UNICEF Deputy Executive Director. “We need to make sure that these services, where they exist, are fully utilised and that every contact between a mother and her health worker really counts. Special efforts must also be made to ensure that the most vulnerable are reached.”

Inequality, particularly in health care access, remains high in the least developed countries: women from the richest households are almost three times as likely as those from the poorest to deliver their baby with a skilled birth attendant. Despite this, the report suggests that the equity gap in under-5 child mortality is steadily reducing. In every region, except sub-Saharan Africa, the proportion of under-five mortality among the poorest sections of society is declining faster than in the richest. More significantly, worldwide, the poor are registering greater absolute gains in child survival than their wealthier compatriots.

In China, between 1991 and 2013, under-five mortality was reduced by three-quarters to 13 per 1000 live births.  So although it has met the Millennium Development Goal 4, the country still ranks fifth in the world in the absolute number of under-five deaths and child mortality rates in poverty-stricken areas outstrip the national average by over 50 per cent.  The Government of China, which has signed on to A Promise Renewed, is preparing a child survival strategy to address the remaining challenges.

“It is deeply heartening that the equity gap in child survival is continuing to narrow,” said Rao Gupta. “We need to harness this momentum and use it to drive forward programmes that focus resources on the poorest and marginalised households; a strategy which has the potential to save the largest number of children's lives.”

About A Promise Renewed

A Promise Renewed is a global movement that seeks to advance Every Woman Every Child – a strategy launched by United Nations Secretary-General Ban Ki-moon to mobilize and intensify global action to improve the health of women and children around – through action and advocacy to accelerate reductions in preventable maternal, newborn and child deaths.

The movement emerged from the Child Survival Call to Action convened in June 2012 by the Governments of Ethiopia, India and the United States, in collaboration with UNICEF, to examine ways to spur progress on child survival. It is based on the ethos that child survival is a shared responsibility and everyone – governments, civil society, the private sector and individuals – has a vital contribution to make.

Since June 2012, 178 governments and many civil society organizations, private sector organizations and individuals have signed a pledge to redouble their efforts, and are turning these commitments into action and advocacy. More details on A Promise Renewed are available at www.apromiserenewed.org.

About Committing to Child Survival: A Promise Renewed 2014 Progress Report

This year's annual report focuses on newborn survival. This report not only presents levels and trends in under-five and neonatal mortality since 1990, but also provides analysis on key interventions for mother and newborn.

More newborns survive because of hospital birth in China 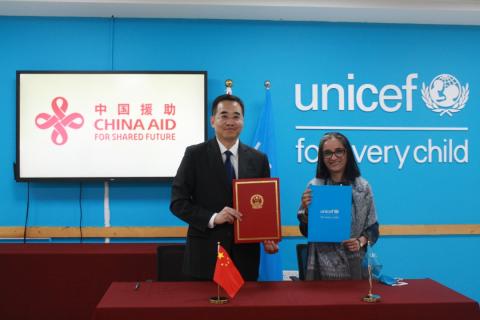 China joins hands with UNICEF to increase access to lifesaving health services for almost 59,400 mothers and children in West Darfur in Sudan

When renovations and supplies modify behaviour