World Children’s Day reimagines a brighter future for every child 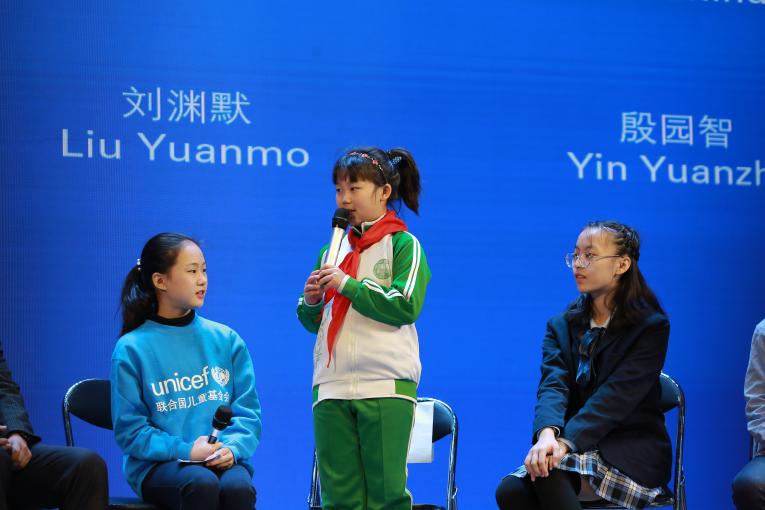 UNICEF/China/2020/Li Manwei
Mu Yuxuan (standing), 9 years old, speaks at a panel discussion during the ‘Climate Change: Youth in Action’ forum in Beijing on 20 November 2020. Held at the China National Children’s Center, the forum was co-hosted by UNICEF, the All-China Youth Federation and the Ministry of Ecology and Environment in celebration of World Children’s Day. It aims to raise awareness of the environmental issues that most affect young people and hear their voices and solutions for change.

Beijing, 20 November 2020 – Cities across China are celebrating World Children’s Day by hosting events and lighting up buildings and iconic monuments in blue, including the Central Radio & Television Tower in Beijing, the Shanxi Grand Theater in Taiyuan, the KK100 building in Shenzhen, and the Binjiang Landscape Tower in Changsha. A total of 14 cities are lighting up buildings, districts, streets, and more. In collaboration with Xinhua News Agency and Tencent Group, UNICEF launched an H5 to highlight key issues affecting children’s lives. In addition, CCTV Children released TV and online programs documenting children’s voices and action on climate change. Another H5 was launched with Weibo and Sina News, to light up cities around China virtually.

World Children’s Day is a global day of action for children, by children. This year, amid the COVID-19 pandemic, UNICEF is working globally to reimagine a future for children where every child’s right to health, education and protection is upheld. The lighting up activities represent a commitment to child rights and reimagining a brighter future for every child, especially the most vulnerable.

The signature event in Beijing for this year’s celebration is the ‘Climate Change: Youth in Action’ forum in Beijing, held today at the China National Children’s Center and livestreamed by CCTV Children. UNICEF, the All-China Youth Federation and the Ministry of Ecology and Environment co-hosted the event. The forum initiated a series of campaigns – both online and offline – to raise awareness of the environmental issues that most affect young people and hear their voices and solutions for change.

“I am very happy to participate in this activity,” said 16-year-old Zeng Ling. “I will educate myself about actions that I can take to protect our environment and reduce climate change.”

UNICEF Representative to China, Cynthia McCaffrey, said “As we reimagine a brighter future for children, this forum provides a valuable opportunity to hear from adolescents and young people – to hear their ideas and solutions for some of the world’s biggest challenges.”

Lv Wei, Deputy Secretary-General of the All-China Youth Federation, said “We hope that through this activity, we can guide young people to actively participate in actions that protect the environment, to constantly enhance their awareness of climate change actions, practice a green lifestyle, and make a positive contribution to the construction of a beautiful China.”

“Children and young people are the future of mankind. Actively responding to climate change is not only imperative here and now, but also key to sustainable development for generations to come. We will continue to strengthen our efforts in this area with greater determination and commitment. We aim to have carbon dioxide emissions peak before 2030 and achieve carbon neutrality by 2060, making positive contributions to the global response to climate change,” said Jiang Zhaoli, Deputy Director-General, Department of Climate Change, Ministry of Ecology and Environment.

UNICEF Ambassador Ma Yili participated in the forum by calling for stronger support to youth in their actions to address climate change. “It is so important that children and young people are given a platform such as this one today to express their voices about issues that will affect their future. I welcome this opportunity to work with young people to reimagine their future”, said Ma.

Across China, children are taking part in World Children’s Day celebrations. Events are also taking place online and offline, with support from a range of partners from the public and private sectors.

Additional buildings being lit up in Beijing by UNICEF, the China Soong Ching Ling Foundation and China Welfare Institute include the China Millennium Monument and the China Soong Ching Ling Science & Culture Center for Young People. In Changchun, Chongqing, Fuzhou, Taiyuan, Wuhan and Yinchuan UNICEF is partnering with the China Friendship Foundation for Peace and Development on lighting up the cities’ iconic buildings, streets and other monuments blue to celebrate World Children’s Day and highlight their commitment to protecting children’s rights. Other cities or counties lighting up include Changsha, Chengdu, Gu’an, Shanghai, Shenzhen, Weihai, and Zhuhai.

In partnership with the All-China Youth Federation, UNICEF is supporting an online campaign focused on educating and encouraging youth to participate in eight actions that can reduce greenhouse gas emissions. The actions include using green transport, reducing food waste, increasing recycling and encouraging their communities to use clean energy.

In the run up to the day a week-long series of runs is being held with the China Athletics Association, the Running China Organizing Committee and the Chinese School Sports Federation. The series and a corresponding social media campaign were launched at the Olympic Forest Park in Beijing on 15 November. This campaign highlights the importance of exercise for children and young people’s mental and physical health. UNICEF Ambassador Chen Kun took part in the launch event and kicked off the run offline and online.

UNICEF Ambassador Wang Yuan released a signature video on the theme of reimagining a better future for children, and he is lending his social media platform to amplify the voices of children with disabilities.

The rights of children are enshrined in the Convention on the Rights of the Child, which China ratified in 1992. This year, World Children’s Day takes on even more significance in the face of COVID-19, where many children across the world are suffering. UNICEF and partners are reimagining a world where no child is left behind, where their rights are protected, and where their voice makes a path for their future.

Unite Our Voices. Light Up for Children.

Are you with us? 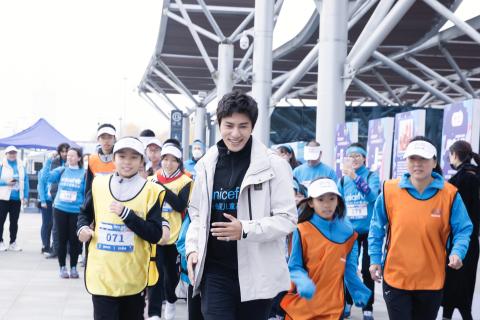 Ahead of World Children’s Day, a week-long series of runs raises awareness about how sport supports children’s physical, mental and emotional health.