A young boy we met during a random inspection of our immunization campaign in Moyu county, Hotan, Xinjiang Autonomous Region. He was vaccinated. Since the first new polio case in China was confirmed in August 26 last year, hundreds and thousands of doctors and medical workers have been mobilized and three rounds of special immunization campaigns organized in Xinjiang Autonomous Region.

Uyghur language brochures on polio are distributed at Friday prayers outside the Grand Mosque of Moyu. UNICEF helped mobilize local Imams to actively promote the vaccination campaign.Early on it became clear that many ethnic Uighur children in the most remote communities were not being immunized. The most urgent need was for quality information and community outreach to remove suspicions and boost confidence among the ethnic minority population.  UNICEF mobilized teams to work with religious and ethnic community leaders to support the campaigns.  A Uyghur language television programme, information leaflets and street performances were organized.

A curious little girl waits by a gate during a vaccination campaign monitoring visit in Moyu county.

Philip Mann from UNICEF (left) and local government partners discuss the difficulties encountered during the last immunization campaigns.The results are encouraging. During the 11-day period from Nov 15-25 2011, polio vaccines have reached 99% of children under 15. Altogether, there are 3.38 million immunized in 5 target counties.

A grandmother and her granddaughter wait in line in Yutian county.

A school teacher and her students in Yutian county.

UNICEF is supporting street performances and rallies to enhance the understanding and importance of the polio immunization campaign. The public show great interests in the interactive Q&A session. 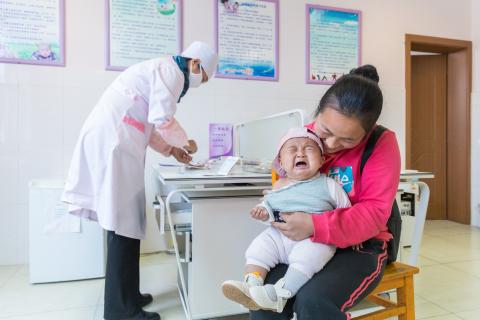