What does a kitchen garden mean to children in a rural primary school in China?

To Principal Yang Peng, it makes the school feel like home.

Yang heads a primary boarding school with 360 students in Heping Township, Sanjiang Dong Autonomous County in south China's Guangxi Zhuang Autonomous Region. One out of every five students at the school is a "left-behind" child, whose parents are migrant workers in cities far away from home.

As China's Ministry of Education and the United Nations Children's Fund (UNICEF) has been jointly carrying out the Whole School Environment Improvement project across the country, positive changes have taken place, which have made students like Yang's feel less lonely being away from their parents.

In the garden at Heping Primary School, vines wind up the fence and one can see melons hanging, passion fruit shining and garden tools sprinkling water across the landscape. The garden has become children's playground.

The idea of having a vegetable garden came into Yang's mind when his school joined the campaign of building a "Beautiful School," which is an extension of the Whole School Environment Improvement project.

"The kitchen garden not only helps them understand farm culture, but also makes their school life more fun."

"I told him that it would be better for me to make it into a vegetable garden. The students would be happy, and he would get some profit, too," recalled Yang.

Each class has its own vegetable plot where students have a weekly class led by their head teacher.

Students are not only interested in the class, but also in the crops they plant. They often go to the garden in their spare time to see how their crops are doing, said Yang.

"Farming education into schooling" stems from the implementation of the campaign of building a "Beautiful School" project in Sanjiang County.

In 2006, a "Water, Sanitation and Hygiene (WASH) in Schools" program was jointly implemented by the Ministry of Education and UNICEF to provide safe drinking water, improve sanitation facilities and promote hygienic behavior at schools in rural areas of the country's less developed central and western regions.

In 2013, it evolved into a WASH-led Whole School Environment Improvement project, including health, nutrition, environment and climate education and disaster management.

From 2013 to 2016, Sanjiang County invested more than 11.8 million yuan in hygienic toilet construction and renovation in 108 schools. The latest statistics as of September 2018 show that 94 percent of schools in Sanjiang County had sanitary latrines, compared with 18 percent in 2013.

The "Toilet Revolution" turned out to be a success, and Sanjiang County wished to go further.

The Whole School Environment Improvement project was expanded to school construction, ecological awareness and other aspects, in an effort to build a "Beautiful School," said Long Huaiyi, head of the county's education bureau.

"Many students are left to stay with their grandparents. Some only have their mothers at home, as their fathers have left for better-paying jobs in bigger cities. They do not have enough care and guidance from both their parents," said Yu Bin, head teacher of class one, grade six at Heping Primary School.

Yu, 27, teaches during the day and takes care of the children at night. She also leads students to clean the toilets and dorms and also works as an art teacher. "It makes me a bit busy," she said.

Each dorm is equipped with 10 beds, two toilets and regular hot water supply.

He Weihua, a sixth grader, only has his mother at home, which is about an hour's drive from the school. His father is a migrant worker.

When he first began living at the school, he missed his mother. But now he has adjusted to his life there.

"The toilets in the school are clean. My teachers are nice. I can play ball with my classmates on the playground. Everything I need is in the school," he said.

The school bus picks up students from their homes on Mondays and sends them back home on Friday afternoons.

"There are always several kids who cry when they have to leave school on the weekends, " said Yu.

The Second Primary School in Doujiang Town also joined the campaign of building a "Beautiful School" project, with a focus on girls' physical health.

Principal Lu Guilian gives lectures every semester on physical health for girls aged between 9 and 12, who are entering puberty.

In the past, girls would go to Lu's office to ask what to do when they started menstruating, Lu recalled.

"The panic the girls experience made me realize that I need to educate them more on their bodies, " Lu said.

The girls' toilets are equipped with doors and garbage cans with lids to protect their privacy. In addition, there are sanitary pads available at all times in the principal's office.

Teachers are like parents to the students at the boarding school.

"Being closest to them, we are obligated to take good care of them."

No school has yet to receive the full score of five stars.

"We would like to try," said Yang, the principal of the school, adding that he just wants to keep getting it better for the children.

"All my colleagues are fighting for a better life for the children." 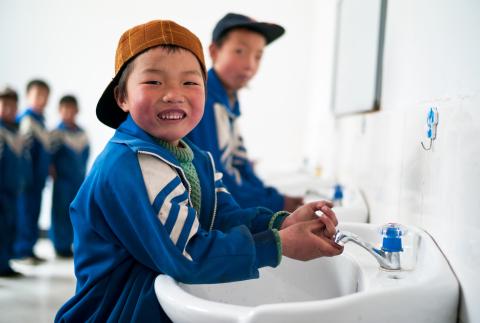 "The school has changed so much”

Sichuan Earthquake Three Year Special: "The school has changed so much”

Water, Sanitation and Hygiene in schools

Water, Sanitation and Hygiene (WASH) in Schools is a component of the UNICEF Child-Friendly, Equitable and Quality Basic Education programme.

Our Work on Child-Friendly Schools - Factsheet

Learn about the Child-Friendly Schools model in China.